Thank you for your patience while we retrieve your images.

Created 30-Dec-09
Modified 30-Dec-09
Visitors 52
40 photos
Oktoberfest is a 16-day festival held each year in Munich, Germany, running from late September to early October. It is one of the most famous events in Germany and the world's largest fair, with some six million people attending every year, and is an important part of Bavarian culture.

The Munich Oktoberfest, traditionally, takes place during the sixteen days up to and including the first Sunday in October. In 1994, the schedule was modified in response to German reunification so that if the first Sunday in October falls on the 1st or 2nd, then the festival will go on until October 3 (German Unity Day). Thus, the festival is now 17 days when the 1st Sunday is October 2 and 18 days when it is October 1. Visitors also eat huge amounts of traditional hearty fare such as Hendl (chicken) , Schweinsbraten (roast pork), Haxn (knuckle of pork), Steckerlfisch (grilled fish on a stick), Würstl (sausages) along with Brezn (Pretzel), Knödeln (potato or bread dumplings), Kaasspotzn (cheese noodles), Reiberdatschi (potato pancakes), Sauerkraut or Rotkraut (red cabbage) along with such Bavarian delicacies as Obatzda (a fatty, spiced cheese-butter concoction) and Weisswurst (a white sausage).
Categories & Keywords
Category:
Subcategory:
Subcategory Detail:
Keywords:
© KrPhotogs Photography LLC 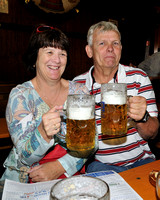